“What Happened to Goodbye” by Sarah Dessen 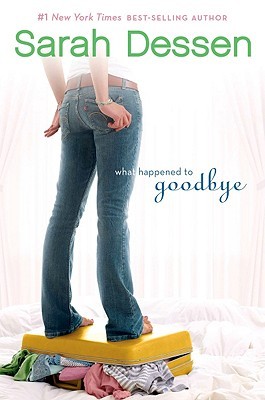 “Since her parents’ bitter divorce, McLean and her dad, a restaurant consultant, have been on the move-four towns in two years. Estranged from her mother and her mother’s new family, McLean has followed her dad in leaving the unhappy past behind. And each new place gives her a chance to try out a new persona: from cheerleader to drama diva. But now, for the first time, McLean discovers a desire to stay in one place and just be herself, whoever that is. Perhaps Dave, the guy next door, can help her find out.

Title: What Happened to Goodbye

The summary of the book hooked me as much as the first chapter, where Sarah’s signature heart and subtle humor is evident the second you start.

The tension between McLean and her mom felt real, as didMcLean’s relationship with her dad. I think thatMcLean’s decision at the end sent out a good self-motivational message for teens (hey, I had to add some sort of moral-thing in there somewhere!).

This is a great read where Sarah touches both the sweet and the sad.

If you’re a fan of Sarah Dessen, I recommend this book. If you’re just starting off with Sarah Dessen, you might want to check out some of her other (better) books too, such as “This Lullaby”, “The Truth About Forever”, and “Along for the Ride”.

I was a little disappointed because I thought this book would show more of McLean trying on her “personas”, but it only touched lightly on that.

The hardcover edition of this book is 402 pages long, and while Sarah is an amazing writer, it felt like a few pages too many. Truth to be told, the story did move along a little slower than some of Sarah’s past works. This book is good because it’s by Sarah Dessen, but compared to Sarah’s other books, this was definitely not one of my favorites.

4 thoughts on ““What Happened to Goodbye” by Sarah Dessen”