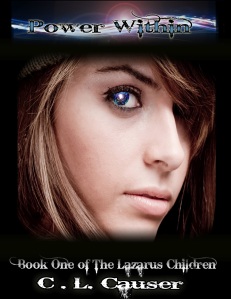 “Charlotte ‘Charlie’ Gordon wants nothing more, than to be a normal girl. But having a near death accident as a child, she finds out that she has powers. After accidentally electrocuting her sister and blowing up her mother’s kitchen, she suppresses her powers for ten years. Unknowing that there are more people like her out there. A lot more.

That is until a secret group of them try and hunt her down because of her unusual abilities. Forcing her family into hiding, she goes on the run. Having to learn about her powers and her past, she meets many new friends along the way. But you can’t run forever. She learns that someone has betrayed her to the very people she is running from.” ~ Goodreads description

Look below for an interview I had with author C.L. Causer!

C.L.: I dreamt of being in every career by the time I was twelve. From a marine biologist to an expedition adventurer. I knew I would never be any of these things (my imagination was a little uncontrollable then), but it didn’t stop me from imagining and making up stories and writing about them. As I got older these stories I wrote got bigger and I realized that it was the writing part that I loved. These world’s I created became my refuge.

Me: How did you come up with the idea for Power Within?

C.L.: There are loads of films, comics, and TV shows like, X-men and Heroes, that revolve around people with superpowers, but I couldn’t find any fictional novels about it. I knew it would be something I would read, and so began the writing…

Me: Why did you choose to write a Young Adult novel?

C.L: It’s a category I love to read. And I read them a lot. I don’t think it matters what age someone is, Young Adult appeals to all ages.

C.L.: Turn off – Facebook, Twitter, Blogger, Hotmail, iPod, iPhone, DVD and TV player. Their can be a heck of a lot of distractions around the house, but once you get into writing early on in the day you look up, with a creaking back and an empty stomach, and you realize its night. And then you do it all over again the next day!

Me: When you were a teen, what were your favorite books and T.V. shows?

C.L.: I loved anything fantasy in my early teens. For books it was Harry Potter, The Black Magician Trilogy and The Belgariad Series and films like The Labyrinth (I had a huge crush on David Bowie :|), The Goonies and The Never-ending Story. But in high school it was all coming of age books. I loved everything by Meg Cabot. She and Janet Evanovich are my all time favorite authors.

Find out more about Power Within on C.L. Causer’s website

Find out more about Power Within on Amazon

Find out more about Power Within on Goodreads