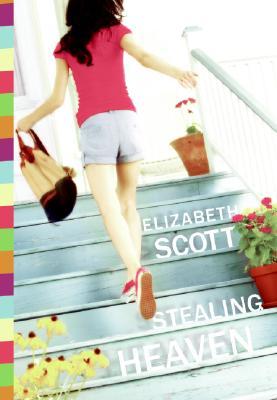 “My name is Danielle. I’m eighteen. I’ve been stealing things for as long as I can remember.

Dani has been trained as a thief by the best–her mother. Together, they move from town to town, targeting wealthy homes and making a living by stealing antique silver. They never stay in one place long enough to make real connections, real friends–a real life.

In the beach town of Heaven, though, everything changes. For the first time, Dani starts to feel at home. She’s making friends and has even met a guy. But these people can never know the “real” Dani–because of who she is. When it turns out that her new friend lives in the house they’ve targeted for their next job and the cute guy is a cop, Dani must question where her loyalties lie: with the life she’s always known–or the one she’s always wanted.”

A thief’s life is the only life Dani’s ever known. Her first memory involves robbing a house, she’s never had anything that’s really hers (including a home), and has gone by many different names. So when Dani and her mother set their sights on a quaint beach town called Heaven, Dani takes on the name Sydney and figures that this job will be like any other one. But she couldn’t be more wrong; because on this job, the unknowing mark is eager to become Dani’s friend and the guy who wants to be more than friends ends up being a cop. What’s a thief to do?

I’ve been wanting to read this book for a while, and I’m glad that I finally did read it! My favorite part of this book has to be the first few chapters, I loved hearing about Dani’s first memory involving robbing a house and then seeing how everything played out when her and her mother returned to the scene of the crime years later. I really enjoyed Elizabeth Scott’s writing style and how we got to see different parts of Dani’s character come out, like how an old worn out sofa makes Dani wonder what it’s like to “call something yours and know it really is.” Or how, when she sneaks into a house with dogs, she ends up waving goodbye to the dog she’s made friends with and wishing she had a dog. I thought the character exploration and the wittiness in this book were spot-on and really made it stand out.

While reading the first half of this book, I was fully prepared to give this book a 4 teacup rating. However, I ended up being disappointed with the ending; I personally thought it all fell a little flat compared to the first part of the book. I can see why the author had things end up the way they did, but I wish there was a happier ending with Dani’s mother and for the friendship between Allison and Dani.

“What she really wanted was to stand next to something she’d passed by a long time ago, to know she was somewhere she’d been before and could easily come again.”

“I can’t figure out what kind of game she’s playing and then, as she’s pointing out the shoes some girl is wearing and asking what I think of them, I realize this is probably how normal people talk. How maybe people who could be friends talk. Weird. And kind of nice, too. But still weird.”

All in all, I’m glad I decided to pick up this book! Have you read Stealing Heaven or any of Elizabeth Scott’s other books? If so, what did you think?