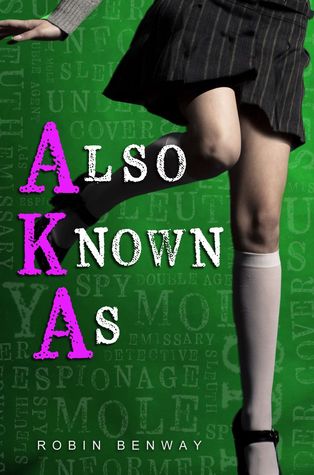 Being a 16-year-old safecracker and active-duty daughter of international spies has its moments, good and bad. Pros: Seeing the world one crime-solving adventure at a time. Having parents with super cool jobs. Cons: Never staying in one place long enough to have friends or a boyfriend. But for Maggie Silver, the biggest perk of all has been avoiding high school and the accompanying cliques, bad lunches, and frustratingly simple locker combinations. Then Maggie and her parents are sent to New York for her first solo assignment, and all of that changes. She’ll need to attend a private school, avoid the temptation to hack the school’s security system, and befriend one aggravatingly cute Jesse Oliver to gain the essential information she needs to crack the case . . . all while trying not to blow her cover.

Special thanks to Bloomsbury and NetGalley for letting me read an ARC. Also Known As will be in stores on February 26th, 2013.

Margaret, or Maggie (or Peggy or Maisie or Molly or Margie or Meg), has twelve different birth certificates and cracked her first lock when she was three; the first name she ever wrote wasn’t her own, it was a near-perfect forgery of her mother’s signature, and when she was tall enough, she started picking locks. As the daughter of spies who work for the Collective, Maggie’s used to changing houses and names; when she wakes up the next morning after a mission in Iceland, it takes her a few seconds to remember that she’s at their new home in New York. But she also wakes up with a surprise: her first solo assignment. Someone is going to expose who works for the collective, and it’s up to Maggie to get the information back. But that involves going to private school (she says the uniform will make her show more leg than she ever has before) and getting close to the son of the man who might publish the article, Jesse Oliver (Maggie says that Jesse Oliver’s golden retriever might be the best part about meeting Jesse). What’s a spy to do?

As soon as I saw this book, I knew I absolutely had to read it because:

1)      It was written by Robin Benway (I loved her book Audrey, Wait! and called it a reason to love the YA genre).

The first few chapters made up the most hilarious and catchiest intro I’ve ever read in YA book. Maggie is a great character with such a funny, sarcastic voice, and I also enjoyed seeing her interact with her parents. Her mom is a computer hacker, her dad can say “You’re grounded!” in twelve different languages, and both find it absolutely hysterical how people think spies are supposed to dress (The trench coat! The Fedora! Ha!). I also enjoyed seeing Maggie interact with the secondary characters from family friend Angelo (described as being if Tim Gunn and James Bond had a baby, and that baby was Yoda), to her new friend Roux (you do not want to ask if it’s “Roo” as in “Kanga”) to rebel-without-a-cause Jesse Oliver (who ends up having a very interesting reason for being caught stealing a paperback of The Catcher in the Rye).

This is one upcoming novel that you will definitely want to buy when it comes out!

I think this is a fabulous book, but I was also disappointed in it, if that makes any sense. There was a lot of romance and funny lines in Also Known As, which can be great, but in this instance it felt like it was taking priority over the spy story line, which was one of the main reasons I picked up the book. Still, I’d definitely recommend this Also Known As.

Filled with an awesome main character, plenty of laughs, and cool spies, this is one fun book! 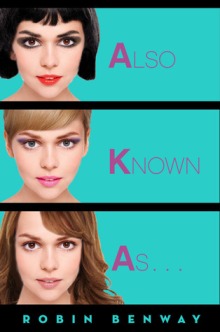 ARC Review: Revenge of the Girl with the Great Personality by Elizabeth Eulberg »
« Author Interview/Book Review: Millicent Marie is Not My Name

22 thoughts on “ARC Review: Also Known As by Robin Benway”