September 4, 2013 by Alice in Readerland 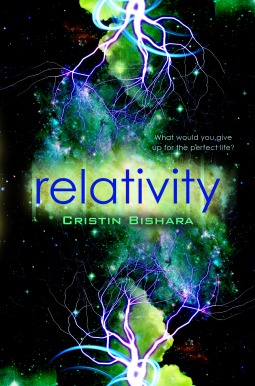 If Ruby Wright could have her way, her dad would never have met and married her stepmother Willow, her best friend George would be more than a friend, and her mom would still be alive. Ruby knows wishes can’t come true; some things just can’t be undone. Then she discovers a tree in the middle of an Ohio cornfield with a wormhole to nine alternative realities.

Suddenly, Ruby can access completely different realities, each containing variations of her life—if things had gone differently at key moments. The windshield wiper missing her mother’s throat…her big brother surviving his ill-fated birth…her father never having met Willow. Her ideal world—one with everything and everyone she wants most—could be within reach. But is there such a thing as a perfect world? What is Ruby willing to give up to find out?

Special thanks to Bloomsbury/Walker Childrens and Netgalley for an ARC of this title in exchange for an honest and unbiased review. Relativity will be in stores September 10th, 2013.

I love the concept of hopping from one parallel universe to the next and Relativity played that part to perfection, in my opinion. I think it really captured the excitement and wonder of stepping into a parallel universe.

What’s different in this other universe? Who’s here and who’s not?

I was so excited each time Ruby stepped out of the tree so that the both of us could discover what type universe she landed in and who “she” was in that universe. For instance, the fashion-allergic Ruby finds out that, in one universe, she loves pink; in another universe, Ruby discovers that she excels at French (which is troublesome, since our Ruby has no idea what French quote mom just told her). I also love how the family dynamics changed from universe to universe, especially the relationship between Ruby and her mom. It was so sweet and sad to watch Ruby, who lost her mom in her universe, discover that her mom is alive in other universes. There was also a very poignant scene at the end that really was a breakthrough for Ruby and held a great (yet bittersweet) message that I loved.

I thought that Ruby’s stepsister Kandy was really out of control violently attacking Ruby. It’s said that parallel universe Kandys are on meds/kleptomaniacs/have had a tough past, but still, that’s no excuse for Ruby not to tell anybody about Kandy harassing her.

I’ve got to say, out of all of the parallel universe books I’ve read this year, I loved the way the concept was handled best in Relativity.

Fast paced and thought-provoking, I’d recommend all you SciFi and Action-adventure readers pick up Relativity. Who knows? Maybe you’ve already read it in a parallel universe.

What are some of your favorite parallel universe stories?