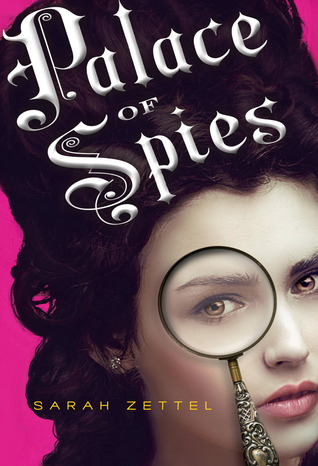 A warning to all young ladies of delicate breeding who wish to embark upon lives of adventure: Don’t.
Sixteen-year-old Peggy is a well-bred orphan who is coerced into posing as a lady in waiting at the palace of King George I. Life is grand, until Peggy starts to suspect that the girl she’s impersonating might have been murdered. Unless Peggy can discover the truth, she might be doomed to the same terrible fate. But in a court of shadows and intrigue, anyone could be a spy—perhaps even the handsome young artist with whom Peggy is falling in love . . . History and mystery spark in this effervescent series debut.

Special thanks to the publisher, HMH Books For Young Readers for providing me with an ARC of this title in exchange for an honest and unbiased review. Palace of Spies will arrive in stores November 5th, 2013.

Margaret Preston Fitzroy is better known as Peggy to those who are close to her, but she is about to become Lady Francesca Wallingham, better known as a prized lady in waiting at the palace. And even better known by those close to her as a spy. But Peggy soon learns that life in the palace can be as cut throat as life in the streets, and everyone–from the people training her as a spy to the Queen to the footman–is keeping a secret. Can Peggy (acting like the ever-fabulous and witty Francesca) figure out all of their secrets before it’s too late? And perhaps solve the biggest question of all: What did the real Francesca know…and what really happened to her?

As soon as I saw this book a few months ago, I immediately knew that I had to read it; the idea of a spies, disguises, and a mystery all set against the historical backdrop of King George I’s palace was a book that just begged me to read it, and it did not disappoint. The writing style and plot of this book is much like Peggy herself, sharp witted and mysterious, with underlying excitement and equipped with the ability to make unexpected decisions that lead to surprising discoveries. I loved the mystery and I loved watching Peggy try to find her footing, as she sinks deeper and deeper into Francesca’s complicated life. I enjoyed learning about the intense training that Peggy had to go through, but I also enjoyed watching her try to figure out how to play the game herself as she navigated the hierarchy of the ladies in waiting. The well-described settings and interesting historical elements also added quite a bit to this novel.

I also loved the ending; I felt that it tied up the immediate story, but left me with enough intrigue and excitement about what was coming next for Peggy.

There were times when I felt that there were pacing issues, but overall, it didn’t hinder my enjoyment of this novel.

All in all, this was one of my favorite historical novels I’ve read all year and I’m already pretty excited for the next installment in this series!

What are some of your favorite historical novels you’ve read this year?

17 thoughts on “ARC Review: Palace of Spies by Sarah Zettel”