ARC Review: Diamonds and Deceit (At Somerton, #2) by Leila Rasheed 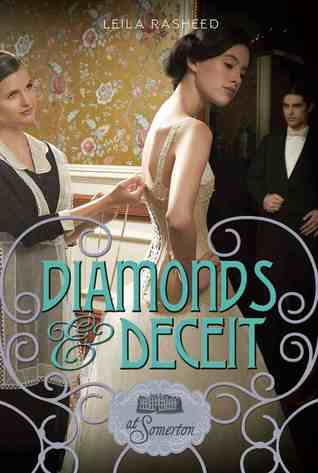 One house, two worlds…book two in our sumptuous and enticing YA series about the servants and gentry at Somerton Court.

London is a whirl of balls and teas, alliances and rivalries. Rose has never felt more out of place. With the Season in full swing, she can’t help but still feel a servant dressed up in diamonds and silk. Then Rose meets Alexander Ross, a young Scottish duke. Rose has heard the rumors about Ross’s sordid past just like everyone else has. Yet he alone treats her as a friend. Rose knows better than to give her heart to an aristocrat with such a reputation, but it may be too late.

Ada should be happy. She is engaged to a handsome man who shares her political passions and has promised to support her education. So why does she feel hollow inside? Even if she hated Lord Fintan, she would have no choice but to go through with the marriage. Every day a new credit collector knocks on the door of their London flat, demanding payment for her cousin William’s expenditures. Her father’s heir seems determined to bring her family to ruin, and only a brilliant marriage can save Somerton Court and the Averleys’ reputation.

Meanwhile, at Somerton, Sebastian is out of his mind with worry for his former valet Oliver, who refuses to plead innocent to the murder charges against him–for a death caused by Sebastian himself. Sebastian will do whatever he can to help the boy he loves, but his indiscretion is dangerous fodder for a reporter with sharp eyes and dishonorable intentions.

The colorful cast of the At Somerton series returns in this enthralling sequel about class and fortune, trust and betrayal, love and revenge.

Special thanks to the publisher, Disney Hyperion, and NetGalley for giving me an ARC of this title in exchange solely for an honest review. Diamonds and Deceit (At Somerton, #2) by Leila Rasheed will arrive in stores January 7th, 2014.

I have so many good things to say about this book! First of all, the prose is just beautiful. I praised the first book in the series, Cinders and Sapphires (At Somerton, #1), for having fairy tale-like quotes, and I was happy to see more of that lovely writing style in this book. Secondly, I love how this book weaves in different elements into the stories, for instance, I’d probably say that this book is historical romance or historical drama, but there’s also a really fun mystery about the “secret” author of a new book and humor scattered throughout the story. There’s also an introduction of some new characters, who I think you all are going to love. (I’d also just like to note that, in the first book, Rose’s story felt a bit like Cinderella meets Downton Abbey to me, which I loved; and this book definitely felt like Cinderella in her new social position dealing with social customs, which I also loved.)

But, what I enjoyed the most about this book, and what has made Leila Rasheed become a name on my favorite authors list, is her portrayal of strong, female characters.

Here’s the thing: I love those strong, female characters who can physically kick butt. I love picking up YA books and reading about girls who are the same age as me who can fight with a sword or be superheroes. Those characters have been some of my favorite characters. But, I think that so many times we are so focused on their physical feats, that we forget the female characters who have so much inner strength, and the ones who feel so very real. That is what Diamonds and Deceit gives us. This especially stands out to me, considering that this book is set in a strict time period where making an accidental faux pas could have you shunned socially, where women didn’t have much rights, and where a sense of duty was drummed into everyone. For instance, we have Ada. Ada may very will be the definition of keeping a stiff upper lip. Although she’s dealing with her own emotional problems and is forced to deal with petty backstabbers, Ada navigates them with regal ease, manipulating the situation when she has to. As the book brings out, Ada’s veil is not made of silk, it is made of steel that protects her. For her time period, Ada is also very forward-thinking and pro women’s rights. Ada is shown making plans to attend a university and being enthusiastic over an editorial in The Times about the economic argument for women in the professions. We also have the youngest sister, Georgina; while in the first book she was a bit naive, she’s practically had to grow up overnight. I loved her character growth and how she really stepped up to the plate in this book. I could just go on and on about this, but I just love what the author did with the characters. For a time period when it wasn’t the easiest for women, I loved how these characters the author created stood out as so strong to me.

At times, I felt a bit overwhelmed by the many different characters and plot lines, but that did not keep me from enjoying the book any less!

Can I just have Book #3 now? Pretty please?

I’d recommend this book for fans of historical novels, for fans of Downton Abbey, or for readers looking for different, yet amazing, strong female characters.

Have you read Cinders and Sapphires or Diamonds and Deceit yet?

13 thoughts on “ARC Review: Diamonds and Deceit (At Somerton, #2) by Leila Rasheed”