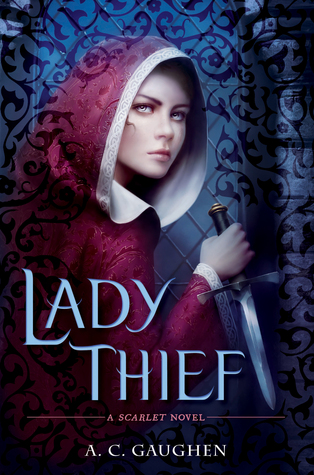 Scarlet’s true identity has been revealed, but her future is uncertain. Her forced marriage to Lord Gisbourne threatens Robin and Scarlet’s love, and as the royal court descends upon Nottingham for the appointment of a new Sheriff, the people of Nottingham hope that Prince John will appoint their beloved Robin Hood. But Prince John has different plans for Nottingham that revolve around a fateful secret from Scarlet’s past even she isn’t yet aware of. Forced to participate at court alongside her ruthless husband, Scarlet must bide her time and act the part of a noblewoman—a worthy sacrifice if it means helping Robin’s cause and a chance at a future with the man she loves. With a fresh line of intrigue and as much passion as ever, the next chapter in Scarlet’s tale will have readers talking once again.

Special thanks to the publisher, Bloomsbury/Walker Childrens, and Netgalley for giving me this title early in exchange for a honest review. Lady Thief (Scarlet #2) will arrive in stores February 11th, 2014.

I love Robin Hood; I’ve read the original tales, the Disney movie is one of my favorite cartoons, and I’ve even written an essay on the history of Robin Hood and Sherwood Forest. So when Scarlet by A.C. Gaughen came out (despite some issues I had with the Scarlet/Robin Hood/Little John love triangle), I really enjoyed seeing the idea that Will Scarlet was really a girl. I thought the concept was really cool, and I liked that Scarlet was a knife-wielding merry woman. When I heard that there was now going to be a Scarlet trilogy, I was very curious to see what would happen in Lady Thief.

So, what did I end up thinking of Lady Thief?

My favorite part of the story was the two new characters the author added. We get to meet Allan a Dale, who added some much-need humor to the story with some hilarious lines. The second character addition I liked was that of Queen Eleanor of Aquitaine. She was a powerful woman, and it made my happy to see another female character that Scarlet liked.

After being tortured, Rob now has troubled sleep, where he tries to strangle and basically kill Scarlet in his sleep. I understand that Rob would now have troubles after being tortured. What I do not understand is 1) After attacking Scarlet and really injuring her, the whole gang tells Scarlet to go sleep somewhere else. Other friends see her horrific bruises and offer her safe places to sleep, but Scarlet won’t go. Not even for one night. 2) Scarlet still insists on sleeping right next to Rob, so if there was a chance of Rob trying to beat her in his sleep again, why didn’t she just move to the other side of the space to protect herself if she insisted on staying with him? After another incident, Rob himself finally had to send her away. Here’s the thing: I’m a teen girl, and this is a book that’ll be read by other teen girls and I’ve seen so many who won’t do things to protect themselves. So this just rubbed me the wrong way.

(Slight spoiler) There’s also a character death at the end that I felt was really unnecessary. Honestly, the death wasn’t honorable or anything, it just seemed like the author got tired of the character.

I had some other issues too, but they’re spoilery so I’ll just stop now.

I love so many books from Bloomsbury and have recommended Scarlet numerous times, but I just can’t find it in myself to recommend Lady Thief.