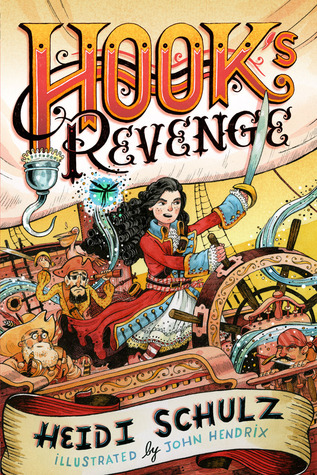 Captain Hook’s feisty daughter hits the high seas to avenge her father’s death at the jaws of the Neverland crocodile in Heidi Schulz’s spirited middle-grade debut.

Twelve-year-old Jocelyn dreams of becoming every bit as daring as her infamous father, Captain James Hook. Her grandfather, on the other hand, intends to see her starched and pressed into a fine society lady. When she’s sent to Miss Eliza Crumb-Biddlecomb’s Finishing School for Young Ladies, Jocelyn’s hopes of following in her father’s fearsome footsteps are lost in a heap of dance lessons, white gloves, and way too much pink.

So when Jocelyn receives a letter from her father challenging her to avenge his untimely demise at the jaws of the Neverland crocodile, she doesn’t hesitate-here at last is the adventure she has been waiting for. But Jocelyn finds that being a pirate is a bit more difficult than she’d bargained for. As if attempting to defeat the Neverland’s most fearsome beast isn’t enough to deal with, she’s tasked with captaining a crew of woefully untrained pirates, outwitting cannibals wild for English cuisine, and rescuing her best friend from a certain pack of lost children, not to mention that pesky Peter Pan who keeps barging in uninvited.

The crocodile’s clock is always ticking in Heidi Schulz’s debut novel, a story told by an irascible narrator who is both dazzlingly witty and sharp as a sword. Will Jocelyn find the courage to beat the incessant monster before time runs out?

How did you come up with the idea of Hook’s Revenge?

I remember enjoying J.M. Barrie’s Peter Pan, as well as the Disney movie, when I was growing up, but the story became far more important to me as a young mother. When my daughter was two, I decided to try an experiment: reading the original Peter Pan while she played before bed. I wasn’t sure if she was absorbing anything until one day she brought me her toy Tinker Bell and said, “She’s sick, Mama! Clap!”

For the next several years, Peter Pan was both her imaginary friend and her alter-ego. We spent many an afternoon “fighting nasty pirates” together.

One day when she was five, I came down with the flu. She was too young to fend for herself, but I was too sick to do much more than lay on the couch. I loaded the DVD player and slept while she watched Hook, rousing myself just long enough to switch to the 2003 live-action Peter Pan when the first movie finished.

I woke with a question in my mind: What if Captain Hook had a daughter? Maybe it was just the fever, but my imagination immediately supplied the answer in the form of a young girl with a mess of dark curls and mud on her hem, wrapped up in the overly large iconic red jacket of Captain Hook. Jocelyn’s story came from that image.

After pretending to fight pirates, how interesting was it for you to put yourself on Hook’s side and have Peter be an annoyance?

That’s a good question. I think, once I started seeing the world through Jocelyn’s (and Captain Hook’s) eyes, I began to see things a bit differently. Captain Hook is a villain. I never attempt to justify that or soften him, but the more I reread the original Peter Pan, thought about his character, and wrote, the more tragic he became to me.

Conversely, Peter Pan became more irritating, what with his arrogance and his never-grow-upedness.

Don’t get me wrong, I love Peter, but it was fun to see him through that lens.

This isn’t really a plot point, but I love the Neverland itself. It’s such a wonderful, absurd place—almost a character in its own right. The idea that no one can find it, but that the Neverland must find you and let you in; I love that. The very land has a will and a personality.

Who wouldn’t want to visit there? Especially since the Neverland has all four seasons at once! I don’t know about you, but I would have loved a little spring, summer, and fall mixed in with this year’s long winter.

I loved writing my narrator— a retired pirate with an intense dislike for children. He is such a great old curmudgeon. The narrator’s distain really comes through on the page as he takes every opportunity to insult the reader, but in a way I think children will really find fun. I loved being able to tease my readers a bit in that way.

I’m learning that publishing has long periods of what looks like not a lot happening followed by everything at once. My writing journey has been much the same. Hook’s Revenge sat on a shelf for years, waiting for me to be ready to give it the attention it needed. Nothing much happened on the page, though the story continued to stew in my mind.

When I was finally ready to give my dream of publication a serious effort, things moved rather quickly. I spent the better part of 2012 rewriting and revising. I began querying in August of that year and signed with my agent in October. We went on submission in December and sold at the beginning of February, 2013. It was a whirlwind.

What advice would you give to aspiring authors?

All the time you spend researching agents, reading about the publishing process, building your platform, and networking are for naught if you don’t finish your book. Devote the majority of your time to honing your craft and writing your book. Those other things can wait for you to finish.

What are 5 words to describe your next work in progress?

There will be more pirates.

Thank you so much for the interview, Heidi! Hook’s Revenge sounds fantastic and I’m so glad to have gotten the chance to get to know more about the author behind it.

Heidi Schulz is a writer, reader, and giraffe suspicioner. She lives in Salem, Oregon with her husband, co-captaining a crew made of their teen daughter, a terrible little dog, and five irascible chickens. Her debut novel for middle grade readers, HOOK’S REVENGE, will be published in the US by Disney•Hyperion on September 16, 2014, and in the UK by The Chicken House shortly after. Bloomsbury Kids will publish her picture book debut, GIRAFFES RUIN EVERYTHING, in 2016. Visit her on her website, Twitter, Facebook, and Goodreads to find out more!

ARC Review: The Here and Now by Ann Brashares »
« ARC Review: Plus One by Elizabeth Fama