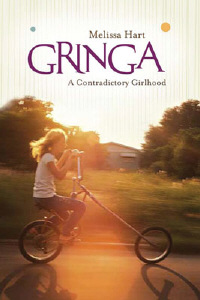 Gringa: A Contradictory Girlhood by Melissa Hart is a marvelous memoir that older teens on up will enjoy.

Gringa has a little bit of everything in it, which was what I enjoyed about it most! Since Melissa tells of her life from childhood on up, this book is filled with different subjects that will attract different readers. For instance, I love theatre, so I was delighted to read about Melissa’s grandparents who were in vaudeville. One reader loved hearing about the Latino culture while another adored the recipes (such as Spanish hot chocolate) Melissa includes in her book.

Below the picture is an interview I had with Melissa! 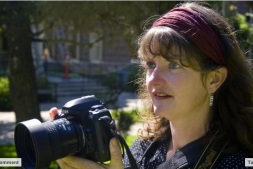 Me: I know you’ve had experience in journalism. You’ve also participated in theatre and grew up hearing stories about your grandparents who were in vaudeville. Do you think these experiences have influenced your writing?

Melissa: I grew up around storytellers. My great-grandmother, who ran away to join the circus and then worked in vaudeville and overseas during WWII, adored telling stories. I grew up listening to them, and looking at her black and white photos of Siamese twins, and trick dogs, and herself pirouetting on top of an elephant. I learned the power of a good story from her, and then I got involved in Drama Club during high school and immersed myself in storytelling on the stage. I kept acting throughout my college years, and learned so much about characterization, dialogue, motivation and setting. These experiences have all influenced my writing; I love a witty anecdote such as the ones my great-grandmother used to tell, and I love the craft of creating a scene such as you’d see on stage for the printed page in memoir and essay.

Me: Pop culture references abound in your book; what do you think teenagers today are going to think of them?

Melissa: Oddly (very oddly), the 1980s are back. My University of Oregon students listen to the music I grew up with, and they’re wearing the same types of clothes! I think they’ll recognize so many references–Boy George and The Culture Club, The Smiths, Sesame Street, Michael Jackson. Even if they don’t recognize the references to musical theater and folk music from the 1950s and 1960s (my mother’s teenage years), hopefully, they’ll Google titles like Seven Brides for Seven Brothers and Peter, Paul and Mary, and discover some wonderful pop culture from the mid-century!

Me: Speaking of pop culture, what were some of your favorite TV shows as teenager? And why?

Melissa: This is a wonderful question, and one I’ve never been asked.  I loved Gidget, The Monkees, Cheers, and Night Court. Oh, and Seinfeld, which was a little later. When I look back at all four of those, I can see that they all had a particular tongue-in-cheek, irreverent humor. That’s still my favorite type of humor–I’m a devoted fan of The Daily Show and Arrested Development.

Me: As a teenager, what was your favorite outfit?

Melissa: Easy! I adored my vintage gold circle skirt with big black polka dots. I wore it with a little black top and a black cardigan, fishnet stockings, and theater flats. I probably looked like an incredible dork, but I’d bought the skirt in the late evening in aVenice thrift store, and I felt myself to be ultra hip whenever I wore it.

Me: Okay, I have to ask this: Did you tell anyone you were writing Gringa? Or did you just surprise everyone by one day having this great published memoir? (Not to mention telling people that they were in it!)

Melissa: My father and I are estranged, so I didn’t tell him about the book. I did, however, let my mother and her partner, and my sister know. I offered to let them read the rough draft of the memoir. I didn’t tell the minor characters; I’m not in contact with many of my high school friends, but one of them mentioned in Gringa read it and loved it. I should note that I changed names and identifying physical characteristics to protect people’s privacy, and legally changed my last name to protect my family’s privacy.

Me: Did you ever struggle with trying to find how to perfectly describe these people who you were so familiar with but your readers knew nothing about?

Melissa: I wouldn’t say I struggled to characterize people familiar to me, but I am a perfectionist in terms of writing, and so I wrote numerous drafts–probably 12-15–of Gringa to make sure I got everyone just right. I feel confident in saying that I captured each character to the very best of my ability, and people who know my family members agree.

Me: I mentioned earlier that I love theatre so I was so excited to see that you talked about it some in Gringa! Did/do you have a dream theatre role you’d love to play?

Melissa: I’d love to play Velma Kelly in the musical, Chicago. She’s so complicated and bold and witty and smart. I can sing the role, but I’m not much of an actress.

Me: Right now you are in Costa Rica. And that is amazing. Tell us more! What surprised you? What are you going to miss? Are you testing out your Spanish there?

Melissa: I spent 10 weeks in Costa Rica with my husband and our five-year old daughter, who is adopted and half-Costa Rican. We wanted to immerse ourselves in her birth mother’s culture and learn Spanish and just generally get a feel for what it’s like to live in another country. I was surprised by the amazing animals everywhere–monkeys in the trees, iguanas on low walls, crocodiles in the rivers! I miss the animals the most, and the warmth and the beautiful beaches (I swam for hours every day), and I miss the daily exploration of a different culture and terrain. We’re actually taking a small group to Costa Rica next February to teach travel writing and photography.  People can find out more about the trip here.

Big thanks to Melissa for the interview!

Check out Melissa’s website where you can also get links to some of her essays (I love the one that included her talking about working with owls). You should also check out her fun blog  (she has posts about Costa Rica! She has pictures of Costa Rican monkeys and horses! How could you not want to visit her blog?).