Here’s a list of the top summer book releases I can’t wait to read:

“Reconnection has begun. The mission of Eden must be fulfilled and Eden’s best Seekers are needed. Forming a new group they dub the Seeders, Fi, Asher, and Sean are joined by a new addition as they set out to bring hope and support to the Topsiders in the form of radios and heirloom seeds. Their experiences Topside prepare them for the threat from marauding gangs they call Lobos, but it is a different, less obvious sort of threat that takes them by surprise. As radio broadcasts begin to reconnect Eden and the Topsiders, the Seeders stumble upon mysterious broadcasts from unknown stations. When two of their own new radio stations go silent within days of each other, Fi and her companions realize that something is terribly wrong. Eden finds itself pitted against a growing and unknown force as their very mission lights the flames of war.”

I loved Eden’s Root, the first book in the Eden’s Root Trilogy! (Some of you may remember my guest blog post http://kissandtellya.com/kiss-and-tell-ya-welcomes-teen-book-reviewer-alice-in-readerland/ where I reviewed Eden’s Root and interviewed Rachel.) As soon as I finished book 1 (what an ending!) I knew that the release of Seeds of War would be one of the highlights of my summer!

A Farewell to Charms (Princess for Hire #3) by Lindsey Leavitt 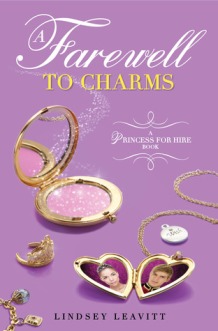 “Desi Bascomb is a princess substitute prodigy–she’s the fastest employee ever to advance to level three in the Facade Agency, and the youngest to ever be a full-time sub. But now with all eyes on Desi, the only thing she wants is a moment alone to talk to Reed, who’s a Facade legacy and secretly a sub for princes As Desi trains for her new role, she spies more than a few cracks in Facade’s perfect appearance. But uncovering the agency’s dark past might require more than a princess sub can handle by herself. Desi is no damsel in distress, but sometimes a girl needs a knight in shining armor.”

Lindsey’s sense of humor and unique writing style made me a fan from the first Princess for Hire, gasp and the cliffhanger in The Royal Treatment, and excited for the final book about Desi.

“Inquisitive and observant, Dora dreams of escaping her aristocratic country life to solve mysteries alongside Sherlock Holmes. So when she learns that the legendary detective might be her biological father, Dora jumps on the opportunity to travel to London and enlist his help in solving the mystery of her cousin’s ransomed love letters. But Dora arrives in London to devastating news: Sherlock Holmes is dead. Her dreams dashed, Dora is left to rely on her wits–and the assistance of an attractive yet enigmatic young detective–to save her cousin’s reputation and help rescue a kidnapped heiress along the way.

Steeped in Victorian atmosphere and intrigue, this gripping novel heralds the arrival of a fresh new voice in young adult literature.”

52 Reasons to Hate My Father by Jessica Brody

“Being America’s favorite heiress is a dirty job, but someone’s gotta do it.

Lexington Larrabee has never to work a day in her life. After all, she’s the heiress to the multi-billion-dollar Larrabee Media empire. And heiresses are not supposed to work. But then again, they’re not supposed to crash brand new Mercedes convertibles into convenience stores on Sunset Blvd either.

Which is why, on Lexi’s eighteen birthday, her ever-absent, tycoon father decides to take a more proactive approach to her wayward life. Every week for the next year, she will have to take on a different low-wage job if she ever wants to receive her beloved trust fund. But if there’s anything worse than working as a maid, a dishwasher, and a fast-food restaurant employee, it’s dealing with Luke, the arrogant, albeit moderately attractive, college intern her father has assigned to keep tabs on her.

In a hilarious “comedy of heiress” about family, forgiveness, good intentions, and best of all, second chances, Lexi learns that love can be unconditional, money can be immaterial, and, regardless of age, everyone needs a little saving. And although she might have 52 reasons to hate her father, she only needs one reason to love him.”

This book sounds like it has a lot of comedy and a lot of heart, a combination I love!

“Before Peter Pan belonged to Wendy, he belonged to the girl with the crow feather in her hair. . . .

Fifteen-year-old Tiger Lily doesn’t believe in love stories or happy endings. Then she meets the alluring teenage Peter Pan in the forbidden woods of Neverland and immediately falls under his spell.

Peter is unlike anyone she’s ever known. Impetuous and brave, he both scares and enthralls her. As the leader of the Lost Boys, the most fearsome of Neverland’s inhabitants, Peter is an unthinkable match for Tiger Lily. Soon, she is risking everything—her family, her future—to be with him. When she is faced with marriage to a terrible man in her own tribe, she must choose between the life she’s always known and running away to an uncertain future with Peter.

With enemies threatening to tear them apart, the lovers seem doomed. But it’s the arrival of Wendy Darling, an English girl who’s everything Tiger Lily is not, that leads Tiger Lily to discover that the most dangerous enemies can live inside even the most loyal and loving heart.

From the New York Times bestselling author of Peaches comes a magical and bewitching story of the romance between a fearless heroine and the boy who wouldn’t grow up.”

“In this high-action and romantic futuristic adventure, there is no escape from the future for two contemporary girls pulled out of their own time.

When twins Sheridan and Taylor wake up 400 years in the future, they find a changed world: domed cities, no animals, and a language that’s so different, it barely sounds like English. And the worst news: They can’t go back home.

The twenty-fifth-century government transported the girls to their city hoping to find a famous scientist to help perfect a devastating new weapon. The moblike Dakine fights against the government, and somehow Taylor and Sheridan find themselves in the middle. The only way to elude them all is to trust Echo, a guy with secrets of his own. The trio must put their faith in the unknown to make a harrowing escape into the wilds beyond the city.

Full of adrenaline-injected chases and heartbreaking confessions, Erasing Time explores the strength of the bonds between twins, the risks and rewards of trust, and the hard road to finding the courage to fight for what you believe in.”

I love C.J. Hill and this book promises lots of action-adventure!

What book releases are you looking forward to?