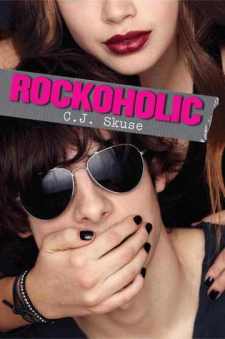 Gonna have to face it: Jody’s addicted to Jackson Gatlin, frontman of The Regulators, and after her best bud Mac scores tickets, she’s front and center at his sold-out concert. But when she gets mashed in the moshpit, loses her precious moon rock, and bodysurfs backstage, she ends up with more than a mild concussion to deal with. By the next morning, the strung-out rock star is coming down in her garage. Jody — oops — kind of kidnapped him. By accident. And now he doesn’t want to leave.
It’s a rock-star abduction worthy of an MTV reality series . . . but who got punk’d?”

Special thanks to Scholastic and NetGalley for providing me with this eARC. You can get your own copy of Rockoholic when it comes out on November 1st, 2012.

What girl hasn’t thought about meeting her favorite rock star? But what girl actually kidnaps her favorite rock star? Not that Jody was planning to. It’s just that when she meets Jackson (frontman of The Regulators) backstage and thrusts out a Curly Wurly (a chocolate bar) to offer him, he’s so drugged up that he thinks the Curly Wurly is a knife and that she’s kidnapping him. Jody, of course, plays along and stashes him in her garage.

But Jody gets more than she bargains for when she discovers that the drugged-up, spoiled, jerky, rock star doesn’t want to leave her garage.

My favorite part of the story has to be when Jody pushes Jackson off a bridge (don’t worry! He lives.). Jackson was being a major jerk and insulting Jody, and I just really liked that even though Jody idolized him for so long, she wasn’t going to stand there and take his insults. True, she went over to talk him out of jumping off the bridge, instead of pushing him in; but I’m still happy that Jody didn’t let Jackson get away with being mean to her just because he was famous.

I also enjoyed that this story was set in the U.K. and used a lot of phrases from there.

This book had such a great premise, but the whole thing kind of fell flat for me. For one thing, I found Jody very immature and annoying and Jackson extremely irritating, even though they did both grow into better people by the end of the novel. I also felt that the story dragged out in some places. Yes, I think it’s great that more issues were explored and that Jody got to feel the consequences, it’s just not the funny, wild romp I was expecting from reading the book description.