In My Mail Box is a feature hosted by The Story Siren where you can share what books you received during the week.

Be sure to keep an eye out for these upcoming reviews:

How My Summer Went Up in Flames by Jennifer Salvato Doktorski

“Rosie’s always been impulsive. She didn’t intend to set her cheating ex-boyfriend’s car on fire. And she never thought her attempts to make amends could be considered stalking. So when she’s served with a temporary restraining order on the first day of summer vacation, she’s heartbroken—and furious.

To put distance between Rosie and her ex, Rosie’s parents send her on a cross-country road trip with responsible, reliable neighbor Matty and his two friends. Forget freedom of the road, Rosie just wants to hitchhike home and win back her ex. But with every mile marker that passes, Rosie discovers a new sense of self…and that sometimes the best revenge is moving on.” 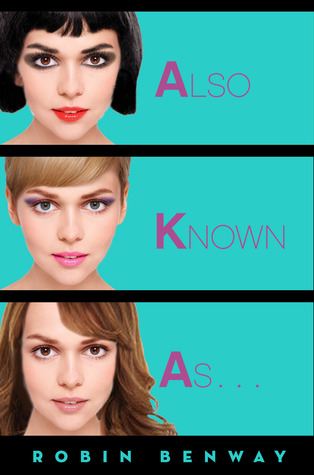 Also Known As by Robin Benway

“From the hilarious and poignant author of Audrey, Wait! comes a fast-paced caper perfect for fans of Ally Carter.

Being a 16-year-old safecracker and active-duty daughter of international spies has its moments, good and bad. Pros: Seeing the world one crime-solving adventure at a time. Having parents with super cool jobs. Cons: Never staying in one place long enough to have friends or a boyfriend. But for Maggie Silver, the biggest perk of all has been avoiding high school and the accompanying cliques, bad lunches, and frustratingly simple locker combinations.

Then Maggie and her parents are sent to New York for her first solo assignment, and all of that changes. She’ll need to attend a private school, avoid the temptation to hack the school’s security system, and befriend one aggravatingly cute Jesse Oliver to gain the essential information she needs to crack the case . . . all while trying not to blow her cover.”

“When sixteen-year-old Violet agrees to spend the summer with her father, an up-and-coming artist in Seattle, she has no idea what she’s walking into. Her father’s newest clients, the Yamada family, are the victims of a high-profile art robbery: van Gogh sketches have been stolen from their home, and, until they can produce the corresponding painting, everyone’s lives are in danger–including Violet’s and her father’s.

Violet’s search for the missing Van Gogh takes her from the Seattle Art Museum, to the yakuza-infested streets of Tokyo, to a secluded inn in Kyoto. As the mystery thickens, Violet’s not sure whom she can trust. But she knows one thing: she has to solve the mystery–before it’s too late.”

The Poodle and the Pea by Charlotte Guillain

“In Animal Fairy Tales, beautiful illustrations and simple text retell classic fairy tales from a new perspective: all the characters are animals! This book, a retelling of The Princess and the Pea, tells the story of the Poodle and the Pea, in which a lost dog is revealed to be a princess after a servant has a good idea.”

“AN INTERACTIVE THRILLER AT DISNEYLAND! Episode One of SEASON ONE is approximately 100 pages and sets the stage for a thriller that allows you to help shape upcoming events. Learn about the history of Disneyland and little known facts about the Resort while you follow the deadliest Navy SEAL in military history, Jack Duncan, on an adventure you will never forget.

What would it be like to live at Disneyland? To talk with Walt Disney in his private apartment above Main Street? To ride Pirates of Caribbean with Johnny Depp?

Get a backstage pass to the thrill of a lifetime as Jack tries to prevent an attack on the Park he loves. Jack must dig deep into Disneyland history to find the clues he needs to thwart the attack and save thousands of lives. Get inside the mind of Walt Disney over coffee in his private apartment above the Fire Station, ride Pirates of the Caribbean with Johnny Depp, and delve deep into the legend of Jean Lafitte — the infamous nineteenth century pirate.

This novel will immerse you in the magic of Disneyland, keep you on your toes, and captivate you with Disneyland history and trivia.”

What books did you get this week?

38 thoughts on “In My Mailbox”