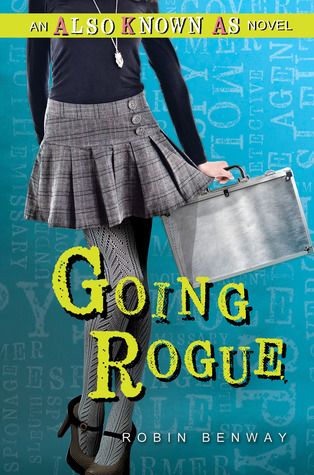 Being permanently based in a local New York City high school as an undercover operative has its moments, good and bad, for 16-year-old safecracker Maggie Silver. Pros: More quality time with her former mark-turned-boyfriend Jesse Oliver and insanely cool best friend, Roux. Getting to spend quality time with her semi-retired and international spy honorary uncle, Angelo. Cons: High school and the accompanying cliques, bad lunches, and frustratingly simple locker combinations. But when Maggie’s parents are falsely accused of stealing priceless gold coins, Maggie uses her safecracking skills to try and clear their names. Too bad it only serves to put her and everyone she loves in danger. Maggie and her “new team” flee to Paris where they must come up with a plan to defeat their former allies.

Special thanks to Bloomsbury/Walker Childrens and Netgalley for giving me an ARC of this title in exchange for an honest review. Going Rogue by Robin Benway will arrive in stores January 14th, 2014.

(My review of Also Known As)

Things That Made This Book Awesome

Robin Benway just has this knack for writing characters that are so funny and quirky and so full of life that they pop off the page, and Going Rogue was no exception. Maggie, Roux, Jesse, and Angelo are back and are more fun than ever as they take on bigger challenges. There are also some brand new characters that are introduced, and they are really cool, you’re going to love them!

This book is partially set in Paris. PARIS!

I love when a book series really keeps up the continuity of the series, but also when it reveals little bits and pieces about things that were just mentioned in passing. In Also Known As, Maggie wonders about someone, the spoiler on the spoiler. In this book, Maggie sees spoiler again and spoiler helps her out, so we see and learn a tiny bit more about her. I really enjoyed that, since I wondered about that character too!

(Okay, so I’m not really telling you anything. I’m just saying spoiler a lot. But still, I had to mention it because it was one of my favorite parts of the book.)

Robin Benway can write humor so well! I wish I could quote from this book to show you what I mean, but trust me, she’s hilarious.

This book is recommended to:

1) Readers who enjoyed Also Known As

3) Fans of spy books or books full of humor

Here, have another Paris gif, just because:

ARC Review and Author Interview: Anyone But You (A Modern Day Spin on Shakespeare’s Romeo and Juliet) »
« ARC Review: Diamonds and Deceit (At Somerton, #2) by Leila Rasheed