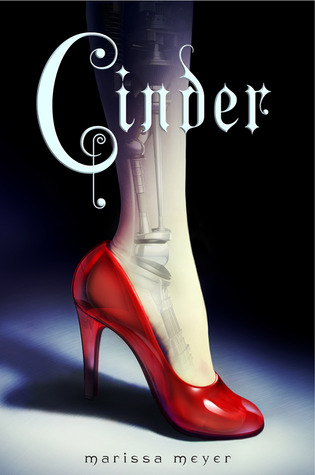 Humans and androids crowd the raucous streets of New Beijing. A deadly plague ravages the population. From space, a ruthless lunar people watch, waiting to make their move. No one knows that Earth’s fate hinges on one girl. . . .

Cinder, a gifted mechanic, is a cyborg. She’s a second-class citizen with a mysterious past, reviled by her stepmother and blamed for her stepsister’s illness. But when her life becomes intertwined with the handsome Prince Kai’s, she suddenly finds herself at the center of an intergalactic struggle, and a forbidden attraction. Caught between duty and freedom, loyalty and betrayal, she must uncover secrets about her past in order to protect her world’s future.

It took me a whole year since it came out to read Cinder, which is quite a long time considering that I was desperately trying to use Lunar mind control to get the mailman to bring me a copy of Scarlet this morning.

You see, I’m always cautious to read books that have received so much hype; for me, the books hardly ever live up to it. But Cinder, on the other (cyborg) hand, not only lived up to my expectations, but totally surpassed them. I’ll try and stay non-babbly and coherent in this review, since the first thing I did after I finished Cinder was call my friend up and say something to the effect of: “It’s Once Upon a Time meets Star Wars. It’s awesome.”

I loved the three-dimensional characters, Cinder and Iko in particular. Iko is just the most adorable and funny character ever, and I loved all her scenes. Cinder learns and grows so much throughout the novel (and seems to grow to be even more hilariously sarcastic in Scarlet) and I love, love, LOVE that she’s a mechanic. As a girl who loves fixing things, tools, and electronics, I thought the Cinder was the perfect character.

Something else I really enjoyed about Cinder was that it was the perfect mix of adding a totally new dimension to what we already know about Cinderella, yet it wove in elements from the original telling that made me smile when I recognized them (for example, Cinder’s “pumpkin carriage”). I also loved seeing the brief mentions/foreshadowing of Scarlet’s grandmother, Wolf, Cress, and Winter sprinkled throughout Cinder, they definitely made me even more excited to see what other stories there were to tell.

Quite honestly, I’m not fond of the subject about the plague or *Spoiler* having a character I like get killed off.

Cinder is the perfect book for anyone who loves fairy tale retellings, SciFi, or just someone looking for a captivating and fun read! Also, don’t forget to check out my review of Scarlet (Lunar Chronicles #2) and my post In Honor of SCARLET, a Week of Little Red Post: From Books to Fashion!

According to the Ultimate Gift Guide for YA Readers on Epic Reads  I should get a copy of Cinder and a multi-piece toolkit. I can’t even tell you how true that is and how much I’d love it! What about you, do you agree with the gift guide?

Remember to stick around for more Fairy Tale February posts here at Alice in Readerland!

31 thoughts on “Cinder by Marissa Meyer”